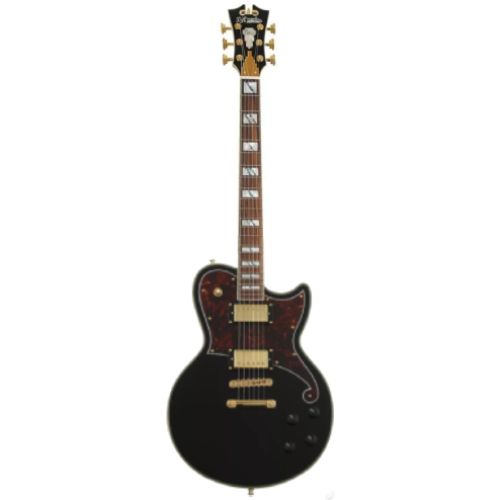 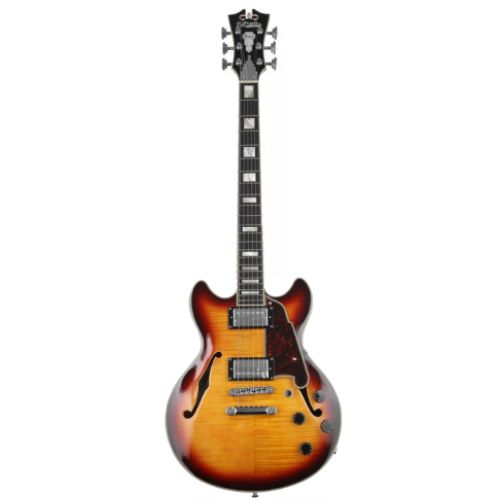 Throughout their long and decorated history, D’Angelico guitars have been used by many of the most iconic big-band and jazz players. Both their acoustic and electric guitars are known for exceptional playability and undeniable tonal quality.

D’Angelico has reemerged in recent years with a selection of new models so that the current generation of guitarists can enjoy the brilliance of their instruments.

In this guide, we’ve identified 6 of the best D’Angelico guitars available today so that you can choose the ideal model for your style and requirements.

What are the Best D’Angelico Guitars?

The first D’Angelico guitar I’d like to bring to your attention is the versatile Premier Mini DC XT. This limited-edition semi-hollow body axe features a classic, vintage design that pays homage to the electric guitars that the brand was known for in the mid 20th century.

Compared to most semi-hollow body guitars, the Premier Mini DC XT is noticeably smaller. Despite the size reduction, I was impressed to find that the playability and dynamic range of the instrument haven’t been compromised at all.

With a pair of high-end Seymour Duncan USA humbuckers, the tone of the Premier Mini DC XT is full of character. It produces a bright, punchy high-end, with an abundance of sustain throughout the fretboard.

We also found the C-shaped maple neck effortless to play, and ideal for complex chord shapes or technical riffs.

One of the qualities that separate average guitar brands from great ones, is if they can produce models across all price ranges at a consistently high level.

With the affordable Premier Fulton LS – Mahogany Satin, which is priced at under $300, D’Angelico has proven that they are up to the task.

This 12-string acoustic-electric guitar boasts stellar playing comfort and a tone that belies its modest price tag. It is technically a Grand Auditorium guitar, but the manufacturer has reduced the size of its mahogany body to improve playability and mobility.

One of the things that stood out to me when I analyzed this 12-string guitar was the lack of weak spots in its frequency range.

Affordable guitars often lack punch in the lower frequencies, but D’Angelico has achieved a wonderful balance, with crisp bass and an articulate high-end.

D’Angelico’s high-end electric guitars are a joy to behold. This D’Angelico Deluxe Atlantic is composed of a blend of tonewoods that culminate in an irresistible tone that matches its appearance.

The tonal versatility of this single-cut electric guitar left us awestruck. Fitted with a pair of DA-59 humbuckers made by legendary pickup designers Seymour Duncan, the instrument produces a thick sound with plenty of energy and bite in the midrange.

Additionally, the inclusion of a coil-split feature means that you can also enjoy single-coil tones, which are perfect for gain-heavy solos.

In terms of its playability, the Deluxe Atlantic doesn’t disappoint. With a thin-body design, the guitar doesn’t cause shoulder fatigue when played for long sessions. It also boasts a slim “C” profile maple neck, which facilitates fast, technical styles of playing.

At around $1,300, the guitar is one of the most expensive models features in this guide, but once you experience its sound and feel this price is more than justified. 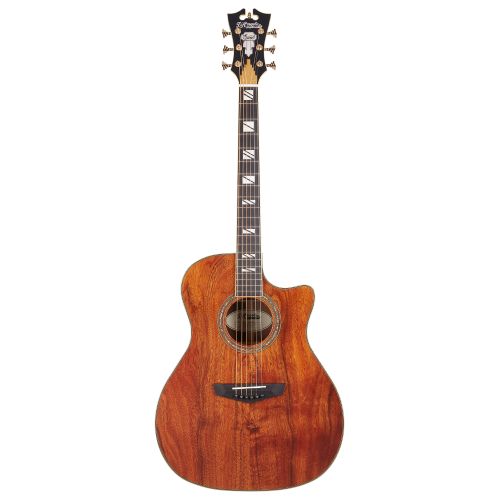 Next up, we have the D’Angelico Excel Gramercy. A stylish acoustic-electric model, this guitar heavily uses the exotic tonewood koa which gives it a unique sound and feel.

Koa has been used for the whole body of the guitar, which is quite uncommon but yields brilliant results. I’ve played several koa acoustic guitars in the past, but none have come close to this D’Angelico creation.

Sonically, I found the guitar to be very well balanced, with a sweet, detailed high-end and substantial bass output. It’s worth noting that koa tends to mellow over time, so while this guitar may sound a little too bright initially, this is temporary.

At under $900, the Excel Gramercy is great value for intermediate and experienced acoustic guitarists. Its classic Grand Auditorium body enhances the clarity of its amplified tone, which is provided by onboard Fishman electronics. 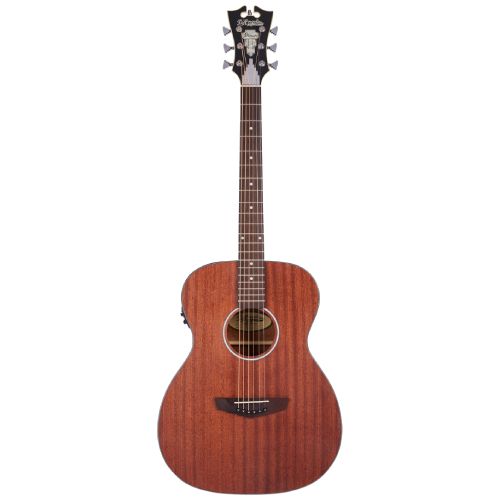 The D’Angelico Premier Tammany LS is a perfect acoustic-electric guitar for beginners or those with a limited budget. Coming in at under $300, it is made from a surprisingly high-quality tonewood blend, which includes a resonant mahogany body and a smooth satin-finished neck.

Another thing that impressed me about this guitar was its tuning stability. Many entry-level acoustic guitars struggle to hold tuning, due to the use of cheaper materials and components.

Furthermore, D’Angelico has installed a reliable tuner on the instrument so that you can quickly rectify any issues in this area.

Stylistically, the Tammany LS is well suited to fingerpicking techniques because of its OM body type.

When the guitar is plugged into an amplifier or PA speaker, its sweet, warm tone is translated accurately and feedback issues are kept at bay thanks to the MG-30 preamp system.

The final D’Angelico guitar on our list is the Vintage Natural edition of the popular Premier Fulton range. This 12-string electro-acoustic represents a step up in quality from entry-level models.

When this guitar is played unplugged, it produces a wonderful mixture of tight bass frequencies, full-sounding mids, and singing highs.

The D’Angelico Premier Fulton – Vintage Natural’s Grand Auditorium body has been reduced in size to facilitate longer playing sessions onstage, in the studio, or the practice room.

With a responsive mahogany neck and ovangkol fingerboard, we were highly impressed by the playability of this 12-string beauty. Costing less than $500, it is well suited to guitarists who want to enjoy rich tonality without having to spend a small fortune.

This guitar is another example of D’Angelico’s attention to detail. With X-scalloped bracing and a bone nut and saddle made from genuine bone, the sustain, resonance, and overall tone of the instrument are improved further.

Originating in New York City in the early 1930s, D’Angelico enjoyed unprecedented success in the decades that followed. Originally renowned for their impeccable archtop guitars, the brand has undergone a transformation in recent years, broadening its range to include many acoustic and electric instruments.

D’Angelico offers models to suit all experience levels and budgets. Their entry-level acoustic guitars like the D’Angelico Premier Tammany LS are incredibly good for the price, and the high-end D’Angelico electric guitars are on par with the likes of Fender, Gibson, and PRS.

Choosing The Best D’Angelico Guitar For You

D’Angelico produces a vast range of guitars, so it’s important to establish your requirements to narrow down the search.

While many guitar manufacturers specialize in either acoustic or electric instruments, D’Angelico is equally as prolific at producing both varieties. The first thing you need to do is choose which type will suit your style most appropriately.

Their classic archtop guitars are great for jazz players, while the D’Angelico hollowbody and solidbody body guitars can be used for all sub-genres of rock, pop, and blues.

Generally speaking, the more expensive the D’Angelico guitar, the higher quality pickups or onboard electronics it will feature. The brand’s high-end electric guitars, like the D’Angelico Premier SS range, use the finest Seymour Duncan humbuckers.

It’s also common for D’Angelico’s solidbody guitars to include a coil-split feature, which allows you to switch between humbucker and single-coil tones for added versatility.

Similarly, the quality of the onboard electronics included on D’Angelico’s acoustic guitars is directly correlated to the cost. Fishman preamps are often installed on the higher-end 6-string and 12-string acoustics, while entry-level models use less capable D’Angelico-designed alternatives.

One of the signature designs used by D’Angelico is reduced body sizes. This is heavily featured on both their acoustic and electric guitars and makes the instruments much easier to play.

D’Angelico often uses classic body types such as the Grand Auditorium on their acoustic guitars like the D’Angelico Exel Gramercy. And they use semi-hollow or hollow-body design on their electric axes. However, you’ll find that many of their guitars are smaller than usual. This generally improves playing comfort and increases certain sonic aspects such as sustain and brightness.

The fact that D’Angelico guitars have been around for the best part of a century is proof of their quality. For guitarists who want an acoustic or electric model that feels and sounds different from most other popular brands’ offerings, they may be a perfect choice. 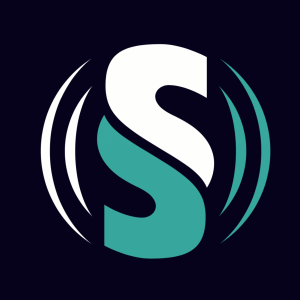