There’s no denying the brilliance of Gibson guitars, but for many musicians, they’re not the most affordable instruments out there. That’s why the manufacturer uses its sibling company, Epiphone, to release more accessible versions of its legendary models.

In recent years, Epiphone’s range of guitars has improved dramatically. The components used to construct these instruments are of very high quality, especially considering their affordability.

If you would like to experience the classic sound of a Les Paul, the effortless playability of a 335, or the red-hot tone of an SG while sticking to your budget, you’ll find some great options in this guide.

These Epiphone guitars were subjected to a rigorous testing process before making it onto our list. This involved monitoring the frequency output and tone they produced through a range of solid-state and tube amps, and with a variety of effects pedals.

Next, we assessed their suitability for lead and rhythm playing while testing the speed that the necks played at and how comfortable their body and overall design were. We then looked at the quality and durability of components such as the bridge and tuning machines. 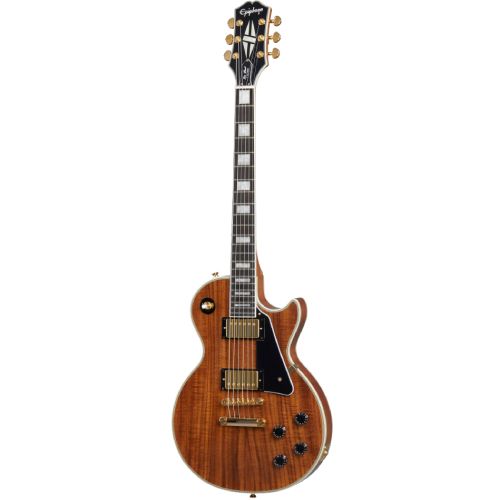 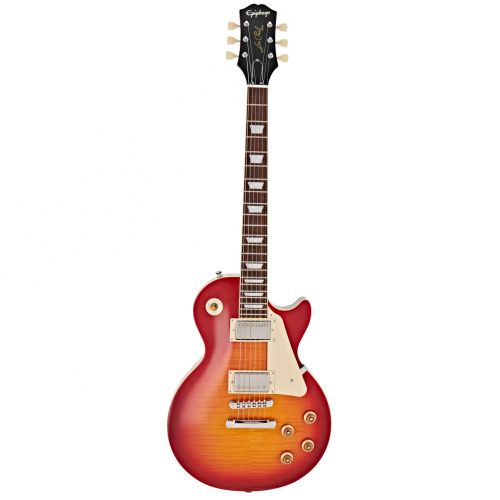 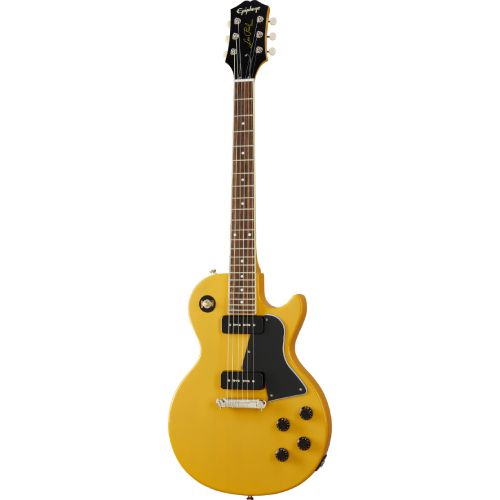 What Are The Best Epiphone Guitars?

By topping this Les Paul’s mahogany body with koa, Epiphone has taken the classic Gibson solid body design and made it sound even sweeter. These two materials combine to deliver a smooth, irresistible midrange that is suitable for many genres.

There are no weak spots in this guitar’s frequency output, and the high-end is particularly prominent. When combined with a gain-based pedal or a tube amplifier, the higher notes of your solos and melodies will have no problems cutting through the mix.

This Les Paul has a pair of ProBucker PAF-style pickups installed, which give it the classic, vintage tone of the iconic Gibson axe.

To ensure Epiphone Les Paul Custom is fit for fast, technical playing styles, Epiphone has used a SlimTaper neck profile which is made from smooth mahogany. It allows you to transition through the frets at a blistering pace while promoting accuracy with your fretting hand.

Epiphone has also upgraded the hardware on this guitar, to improve its tuning stability and make it more comfortable to hold for long periods. 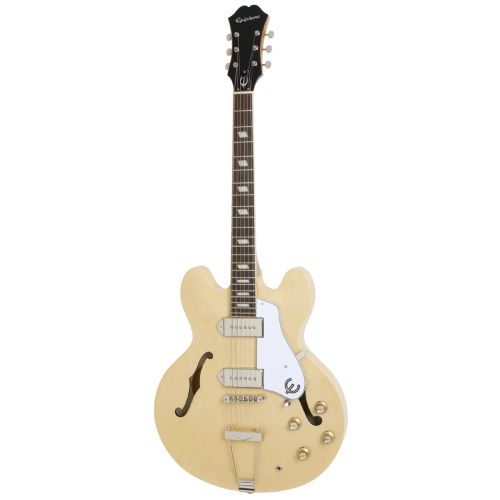 With two F-holes carved into the laminated maple body, the Casino Archtop looks like it was made in the late 1950s. Delivering a punchy tone with a prominent upper midrange, this guitar is a great choice for rock n’ roll, jazz, or blues guitarists.

Gibson and Epiphone are both renowned for using P-90 style pickups on their guitars very effectively, to increase the bite of the treble frequencies, and give their instruments an overall higher output.

Epiphone Casino Archtop Hollowbody Electric Guitar has a P-90T single coil in the neck position, and a P-90R in the bridge position. These PAF pickups produce the classic tone that can be heard in early 1960s rock songs by bands like The Who or The Beatles.

Finally, Epiphone has used a SlimTaper “D” neck profile, so that you can quickly move from note to note when playing melodies, riffs, or licks.

Remakes of classic electric guitars are often either very convincing, or disappointing. The Limited Edition 1959 Les Paul Standard by Epiphone falls into the former category, with its distinctive, aged design.

The maple neck is shaped in the authentic late-50s Gibson shape, which promotes fast playing and accurate finger placement. It feels smooth and responsive underhand and is ideal for powerful rock n’ roll guitar playing.

To complement the physical attributes of this fantastic Les Paul remake, Epiphone has employed a pair of Gibson-designed Burstbucker pickups, which deliver the fiery, crisp tone of the late 50s Gibson model.

The figured maple top and mahogany body have been subjected to an aged gloss finishing, which very closely resembles the VOS finishes used by Gibson in the ’50s and early ’60s.

A Tune-O-Matic bridge provides good tuning stability and intonation, and these qualities are further enhanced by the inclusion of a stop bar tailpiece. Finally, the fingerboard, which consists of 22 medium-jumbo frets, is made from Indian Laurel. 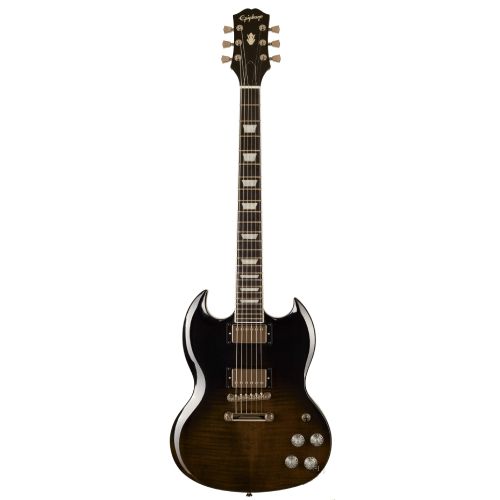 With a pair of ProBucker humbucking pickups, the SG Modern delivers a tight, high output tone that is well balanced across the frequency range.

It’s a great choice for heavy rock or metal guitarists, due in part to the guitar’s ability to absorb distortion and gain without sounding overly aggressive. The midrange has a warm thickness to it, and the high-end frequencies are perfect for flashy solos.

To ensure maximum tuning stability no matter how hard and fast you play, Epiphone has used Grover Rotomatic locking tuners, which are widely considered to be amongst the best in the world.

The tonewood blend used by Epiphone resembles the high-quality materials that Gibson uses on its high-end SG guitars. A mahogany body increases resonance, while the SimTaper neck, which is made from the same material, promotes pacey playing styles.

The fingerboard consists of 24 medium jumbo frets, which is ample space for technical playing and is made from smooth ebony.

The Epiphone Les Paul Special is a blend of vintage characteristics and modern improvements. With a pair of P-90 Pro Soap Bar pickups installed on this solidbody, it produces the hot tone that the early Les Paul is known for.

These P-90 pickups were initially created by Gibson’s Seth Lover in the 1950s, and are still used by the brand today. They provide the best qualities of single-coils, with good note separation and energy, but also widen the tone slightly to make it more substantial.

Epiphone has used mahogany to construct the body of this Les Paul, which is the wood of choice on most high-end Gibson offerings. Mahogany extracts every last drop of sustain from the notes and increases the overall resonance of the guitar.

To ensure that this guitar is as comfortable to play as the original Gibson models, Epiphone has made the Indian laurel fingerboard 12” in radius, with 22 medium jumbo frets providing enough space for complex techniques and chord shapes.

Things to consider when buying:

Epiphone is one of the longest-standing instrument manufacturers still in business today. The company was acquired by Gibson in 1957 and has historically been used as an outlet for affordable Gibson guitars, much like the relationship between Fender and Squier.

The final category of Epiphone guitars is those that are exclusive to the brand, like the Sheraton, Casino, or Riviera.

One of the things that separate Epiphone from the majority of affordable guitar manufacturers, in my opinion, is its commitment to using high-quality tonewoods and materials.

It’s common for budget guitar brands to compromise on build quality to keep costs to a minimum, but many of Epiphone’s guitars share the same tonewood combinations as the full-priced Gibson models like the Epiphone SG Modern.

Mahogany is a staple wood used for many Epiphone guitar bodies, even on some of the most affordable models. This tonewood is great for increasing the resonance and warmth of Epiphone electric guitars.

Maple is commonly used by Epiphone for the guitar necks, and the fingerboards are often made from high-quality alternatives to rosewood, such as pau ferro, Indian laurel, or ebony.

Another thing that impresses me about Epiphone guitars is their overall build quality, especially on models like the 335, ‘59 Les Paul, or SG copies.

Although these guitars don’t have the same expensive hardware and components that you’d find on high-end Gibson offerings, they’re still built to last, and they look like they should cost significantly more than they do!

The majority of the Epiphone electric guitars featured in this guide use pickups that are based on the ones used in the original Gibson models. Epiphone, like Gibson, manufactures a wide range of pickups.

You may have noticed that the P-90 pickups are featured heavily on these Epiphone guitars. This is because many people associate the Gibson tone with these pickups, and ultimately a lot of Epiphone’s fan base comes from the affiliation with Gibson.

Generally speaking, the more expensive the Epiphone guitar is, the better quality pickups it will have installed on it. Some of the high-end Epiphone axes have Gibson-designed pickups installed, such as the limited-edition Les Paul copies.

The Epiphone BurstBucker pickups are commonly used humbucking pickups, while many of the guitars have soap bar-style P90s, which provide the single-coil definition with the thickness of a humbucker.

Choosing The Right Model for Your Playing Style

When considering which Epiphone guitar is best suited to your needs, it’s highly important to consider the bigger picture rather than focusing just on one aspect.

When I first started as a guitarist, I often fell into the trap of being drawn in by the way an instrument looked, rather than considering the way it felt when I played it, or its tonal qualities.

Indeed, aesthetics is an important aspect that should be taken into consideration when making your decision, but no matter how good the Epiphone guitar looks, if its physical and sonic qualities don’t match your playing style, you’ll be left frustrated.

If you’re a lead guitarist who likes to play fast, it may be a good idea to choose a solid-body Epiphone guitar that has a thin neck profile and single-coil pickups such as the Epiphone Casino Archtop Hollowbody Electric Guitar and Epiphone Les Paul Special Electric Guitar.

Alternatively, if you predominantly play chords and rhythm guitar, and you need a more resonant, chunky tone, you should probably opt for a hollowbody instrument with humbucking pickups installed.

Whenever you purchase a new guitar, whether it is made by Epiphone, Fender, or a local guitar maker, it’s incredibly important to consider how it will interact with the existing gear in your rig.

The pickups installed on an electric guitar will create a different sound when combined with your amplifier and pedals, as will the tonewoods used to construct it, and the other components like the bridge.

Although Epiphone is often in the shadow of Gibson, this manufacturer produces some excellent guitars, as we’ve evidenced in this guide. If you choose one as your next axe, you won’t be disappointed by the tone and playability they offer. 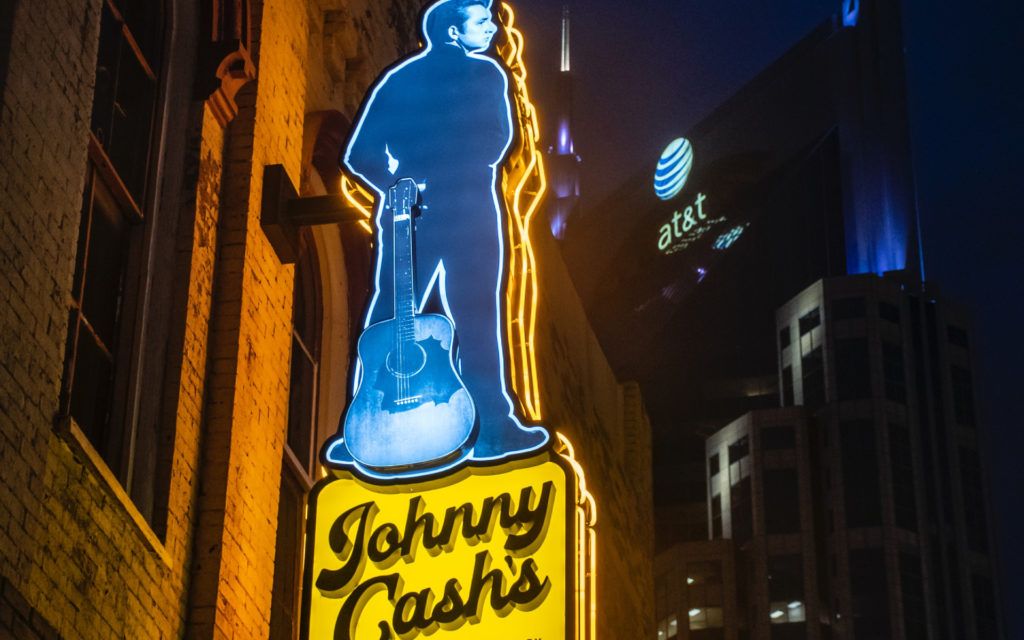 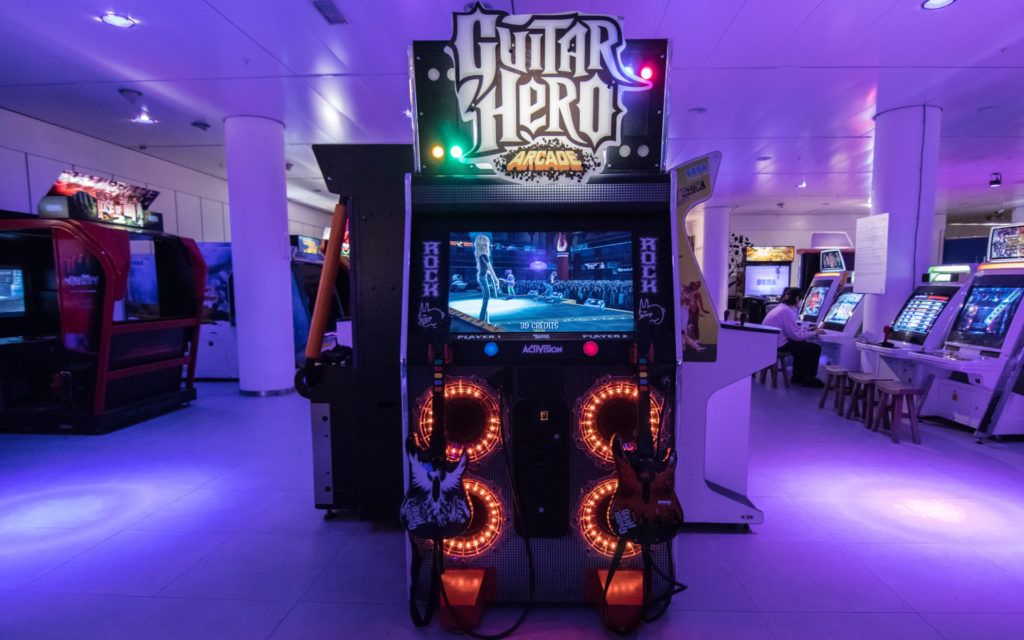 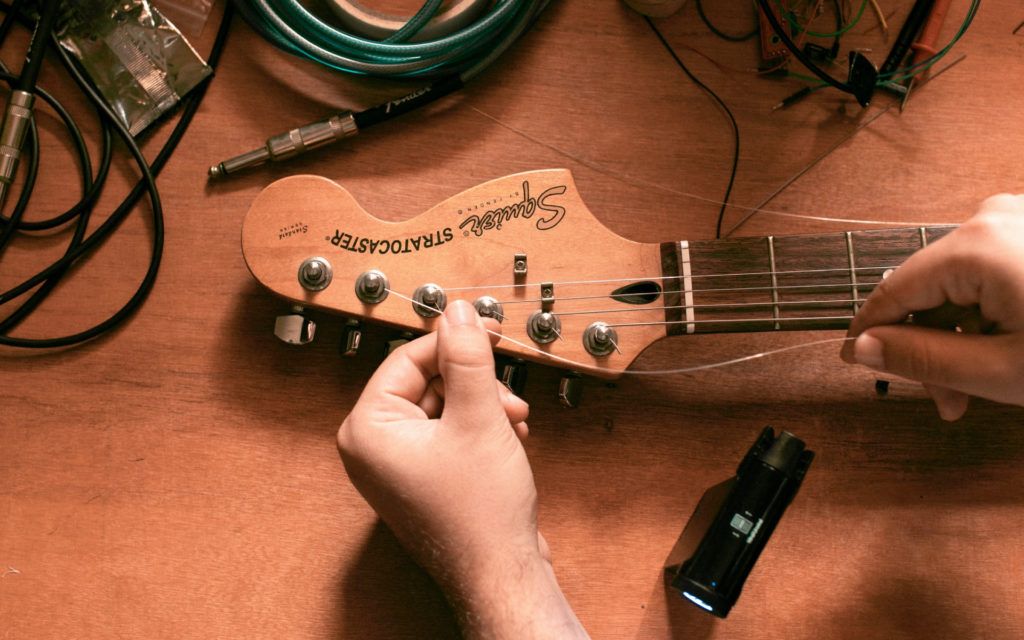 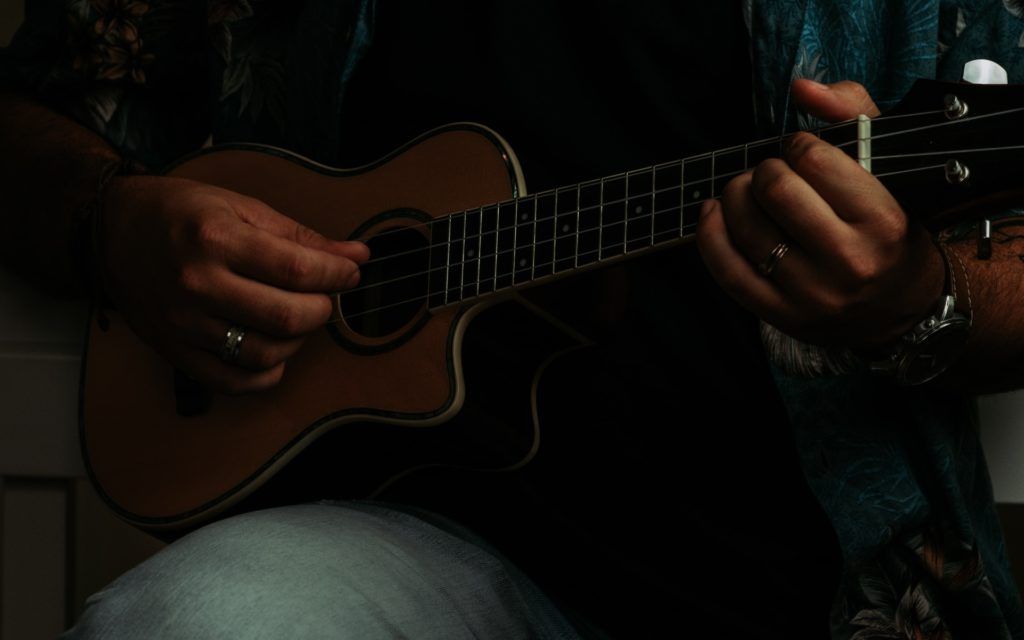 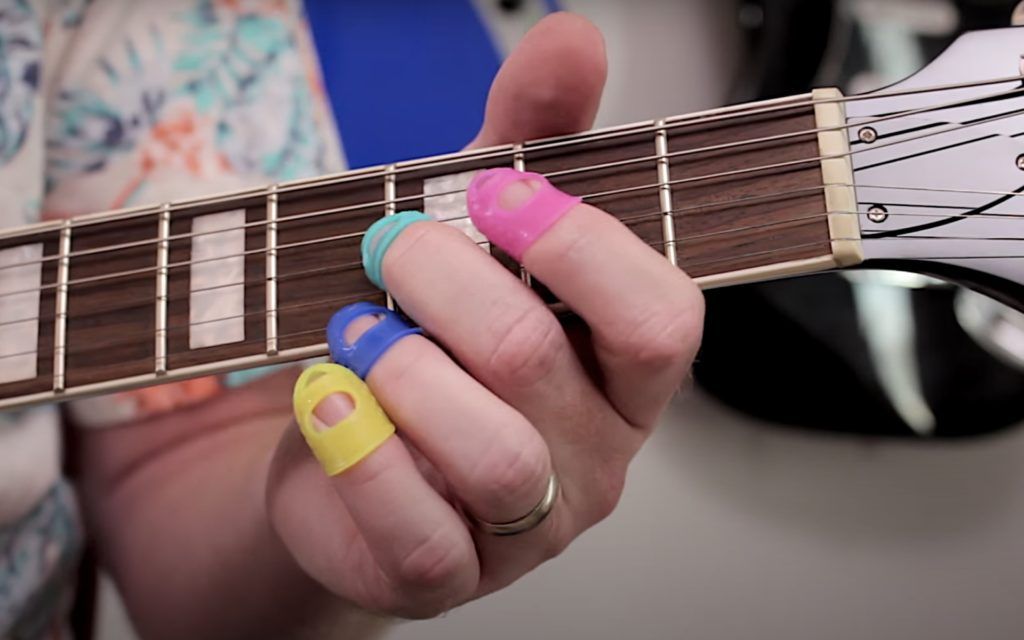 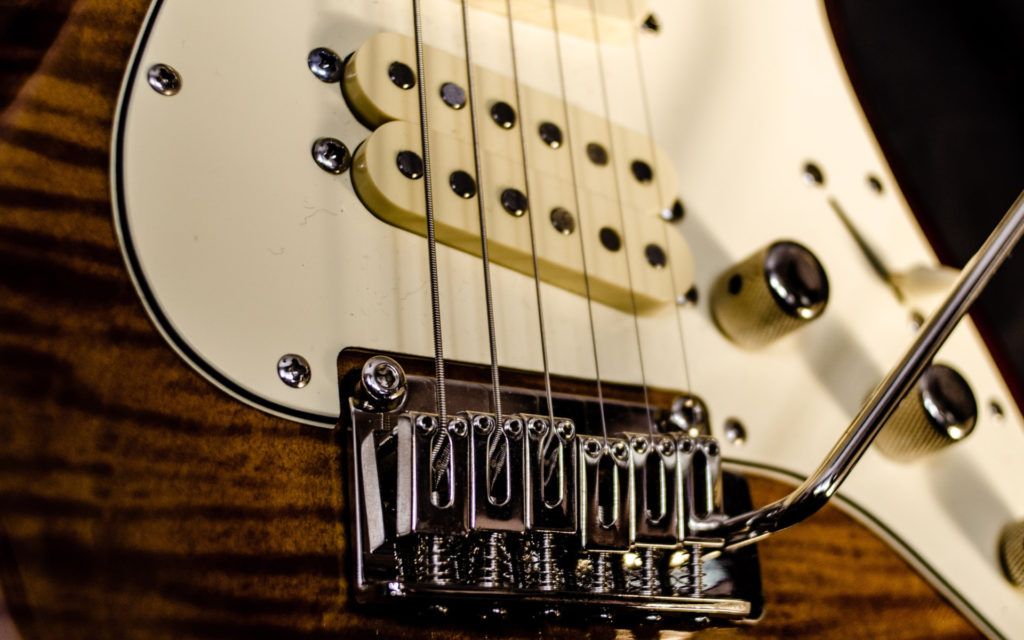