When performing live, it’s essential that a singer can hear themselves. Stage monitors can be unpredictable, and the sound of your voice may get overpowered by other instruments onstage.

In-ear monitoring for singers is the best way for vocalists to hear themselves during a performance. These smartly designed devices allow you to create tailored mixes so that you get clear playback of your vocals into a set of earphones.

No matter what your budget is, you’ll find a suitable in-ear monitor system in this detailed guide.

What are the Best In-Ear Monitors For Singers? 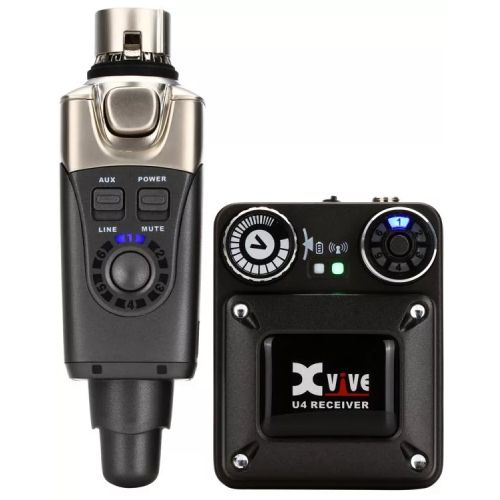 Xvive’s U4 wireless in-ear monitoring system is an affordable option that provides reliable results. It’s amongst the easiest systems to operate and is ideally suited to vocalists.

With an operating range of up to 90 ft, I’d highly recommend this in-ear monitor to singers who predominantly play in small or medium-sized venues.

The lithium-ion battery provides 5 hours of continuous use on a single full charge, which is adequate for long shows and the inevitable encore! Latency is kept to an absolute minimum, with a barely noticeable delay of 5ms.

Setting this Xvive in-ear monitor up is very straightforward. All that you need to do is connect it to a laptop, interface, or mixer via the line-level output, and hook up a set of earphones, then use the auto-scan feature to hear your singing in real-time. 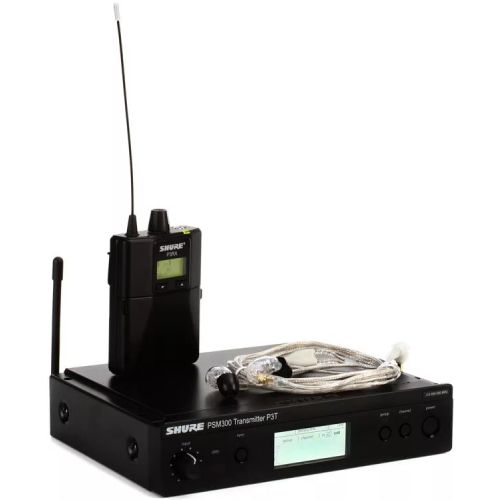 The Shure PSM300 P3TRA215CL is the perfect solution for vocalists who aren’t keen on using wedge monitors. This system works simultaneously to protect your ears, while also delivering crystal-clear audio through the SE215 earphones.

To ensure straightforward operation, Shure has included a one-touch sync button on the front side of the transmitter. This automatically scans for the best available frequency, so that you don’t need to waste time when setting up your vocal monitors.

We found the “MixMode” feature to be very useful, as it allows you to control the levels of your vocal monitoring, and any other instruments or backing tracks that you need to hear.

Shure’s SE215 earphones block out a lot of the background noise, minimizing the spill from other instruments onstage. This leaves you to focus on the mix that you’ve set up in your in-ear monitors with no distractions. 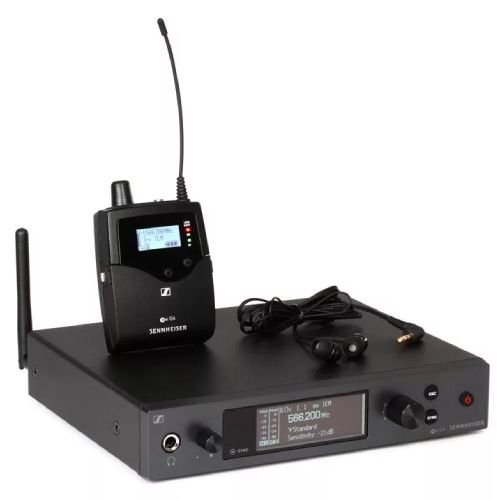 In typical Sennheiser fashion, the high-end EQ IEM G4 goes above and beyond to deliver outstanding sound quality and performance. This set includes everything a singer could need to hear their vocals onstage.

The SR IEM G4 transmitter is roadworthy and very easy to operate. It features a rack-mountable design, which could be useful if you’re using the system in the same practice room or venue for the foreseeable future.

Sennheiser has upgraded the interface in the transmitter, making it even quicker to sync than previous models. Also, there’s no filler in terms of the onboard controls – each one performs a vital purpose.

Moving onto the included receiver in this in-ear monitor system, Sennheiser has smartly designed it so that the headphone lead doubles up as a secondary antenna. This prevents unexpected cut-outs mid-performance.

The included earphones are perhaps the weakest link in the set, but they still provide some noise isolation and good sound quality. 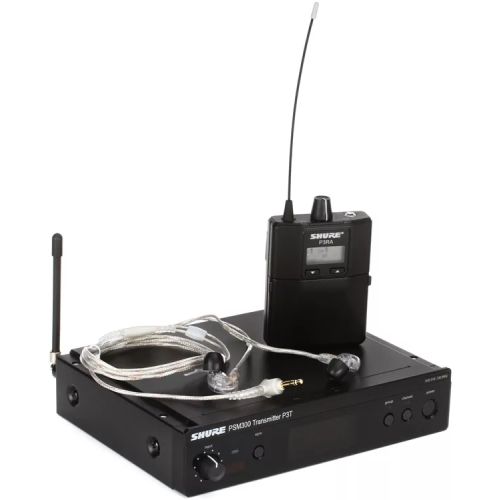 The P3TRA215CL in-ear monitor system provides everything a singer requires to hear their vocals when performing live.

A standout attribute of this Shure system is its sound quality. The SE215 earphones sound balanced across the frequency spectrum, making them suitable for blending your vocals with guitars or other instruments that need to be audible in the mix.

I also enjoyed the inclusion of the battery level indicator on the P3RA receiver. This allows you to keep tabs on the remaining power so that you know when it’s time to replace the two AA batteries.

If you’re looking for in-ear monitors that perform to a high standard but are still reasonably priced, this Shure system is one of the best mid-range options on the market.

The 300ft operating range means that the P3TRA215CL in-ear monitors can be used in venues of all sizes, and the onboard limiter ensures that your hearing is protected from volume spikes. 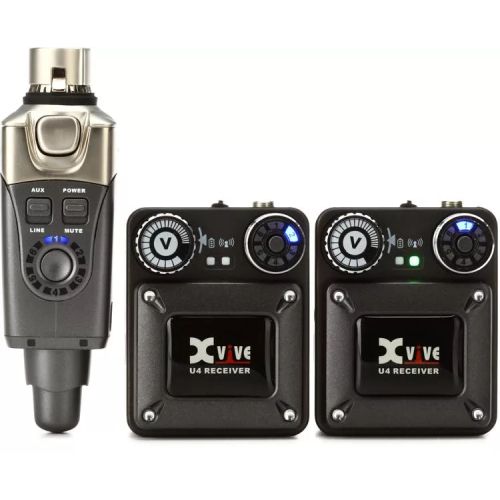 For singers who are accompanied by backing vocalists or other musicians when performing live, the dual-receiver edition of Xvive Audio’s UR42 is the perfect solution to your monitoring needs.

Setting up this in-ear monitor system couldn’t be easier. All that you need to do is either hook up the return channel from your mixer or another audio device, plug in a set of earphones, and you’re good to go.

One of the features that stood out to us when analyzing the UR42 was the volume control installed on both receivers. The textured design means that both vocalists using the system can adjust their levels without disrupting their performance.

Both the transmitter and receiver have inbuilt lithium-ion batteries, which are rechargeable and provide around 5 hours of constant usage before running out of power. This eliminates the need for replacing batteries and reduces future costs. 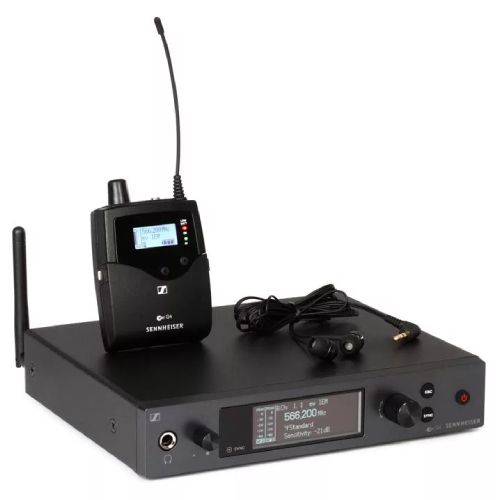 If you’re serious about achieving the ultimate clarity of vocal monitoring, I’d suggest considering the EQIEM G4 – A1 Band by Sennheiser. This system minimized stage noise, allowing you to hone in on the desired sounds coming through the earphones.

Firstly, Sennheiser has designed the SE IEM G4 transmitter to withstand the inevitable rigors of touring and playing live shows. The rack-mount design makes it easy to secure the device so that it stays in place throughout a performance.

The receiver is also a sophisticated piece of equipment, with features such as a visual battery life indicator, and automatic frequency scanning for ultra-quick setup.

Another innovative feature that I believe many singers will find useful is the automatic lock included on the transmitter. This prevents the settings from accidentally being changed after sound-check, and gives you peace of mind when performing.

Finally, IE4 earbuds add the finishing touches to this in-ear monitoring system. They provide a striking sound quality when used for vocals or other instruments.

Most singers have experienced the frustration of not being able to hear their vocals clearly when performing live. This problem is common when relying on on-stage monitors, which have to contend with the amplifiers and other speakers on stage.

In-ear monitors for singers such as the Xvive Audio U4, Shure PSM300 P3TRA215CL and Sennheiser EQ IEM G4 can positively impact your performance in ways you didn’t even know were possible. Here’s a breakdown of the vital components and information you need to make the right choice.

In a system of custom in-ear monitors for singers, the transmitter performs the vital function of outputting the audio of your vocals to the receiver.

This device is often positioned at the side of the stage, or by the mixing desk. It may also have a rackmount design, which allows it to be secured to another structure for added stability.

Transmitters include a range of controls for selecting the frequency, adjusting levels, and altering tonal settings such as EQ or gain.

As I previously mentioned, the receiver picks up the audio signal from the transmitter and is responsible for playing back the sound of your singing through a set of earphones.

Receivers also feature controls for adjusting the volume, so that you can make real-time alterations while performing.

Most commonly, the receiver is attached to the singer’s body via a clip mechanism that attaches to an item of clothing, like a pocket or a belt. This allows the singer to move around freely without any excess wires or cables impeding them.

In-ears for singers often like the Shure PSM300 P3TRA215CL, Xvive Audio UR42, and Sennheiser EQ IEM G4 include an array of useful features to help them function more smoothly.

Automatic frequency scanning allows you to establish the best possible channel for the receiver and transmitter to connect to without having to select it manually.

To save you time and effort every time you set up your in-ear monitors before a performance or rehearsal, I’d recommend choosing a system that has auto-scanning capabilities.

The operating range of the in-ear monitors indicates the distance that the receiver can be used from the transmitter before it cuts out or experiences interference.

Some systems facilitate up to 300ft, while other more affordable options may be better suited to smaller venues.

Many vocalists choose to use their own molded in-ear monitoring earphones, as they provide the best noise cancellation and hearing protection.

Generally speaking, in-ear monitor systems include a set of earphones, but they are not guaranteed to be of the highest standard. The earphones must allow you to hear your vocals with clarity and have a wide enough frequency range for other instruments within the mix. 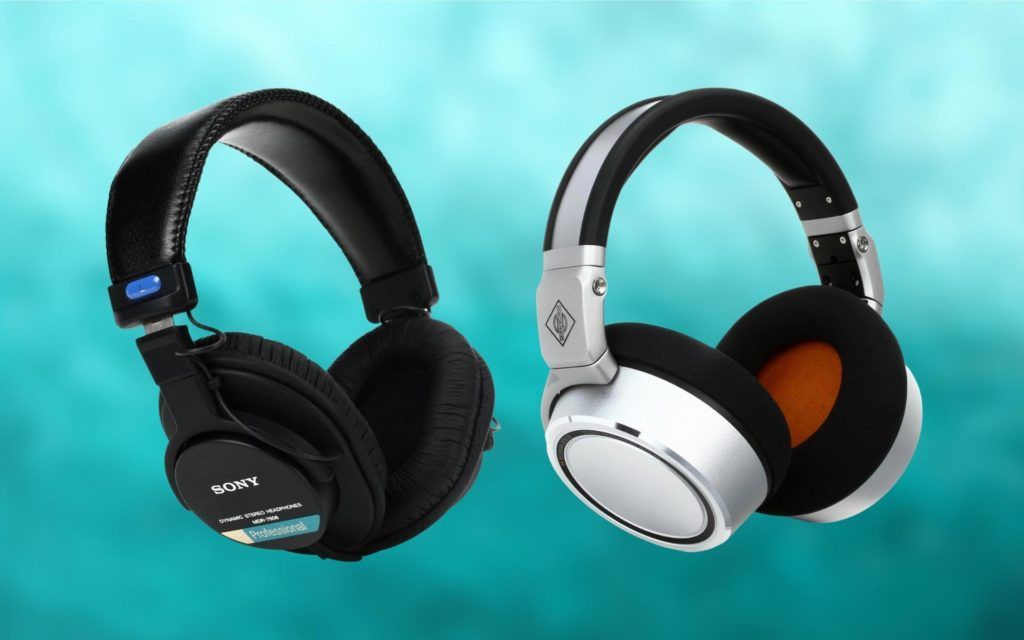 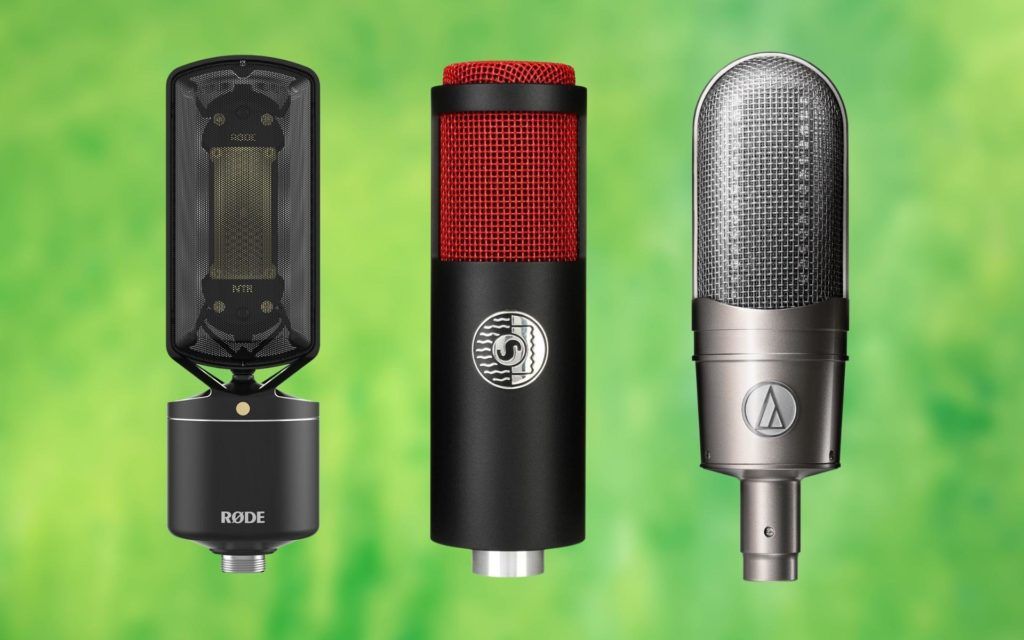 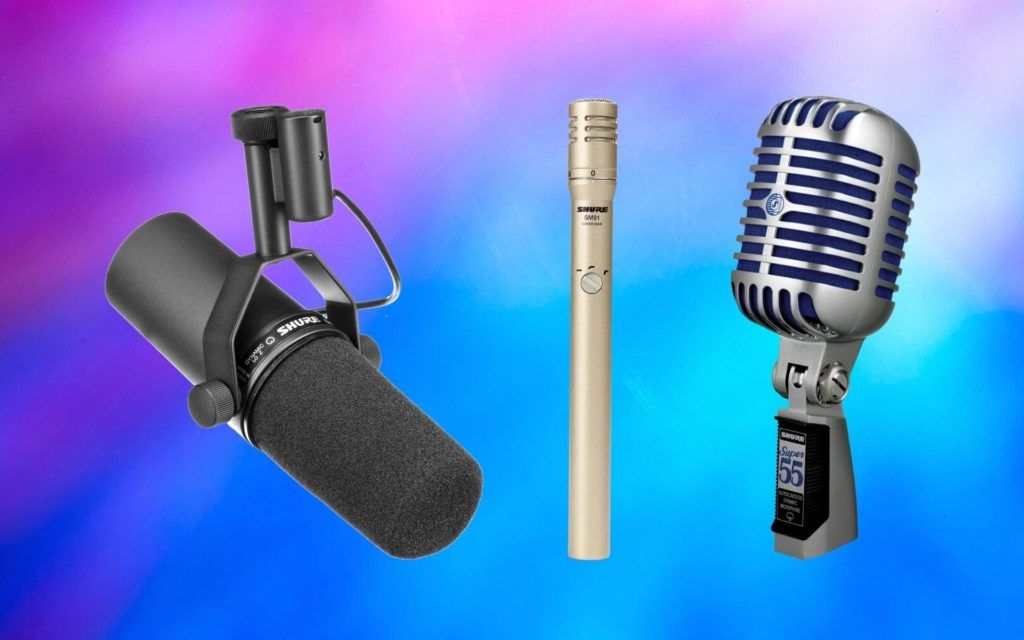 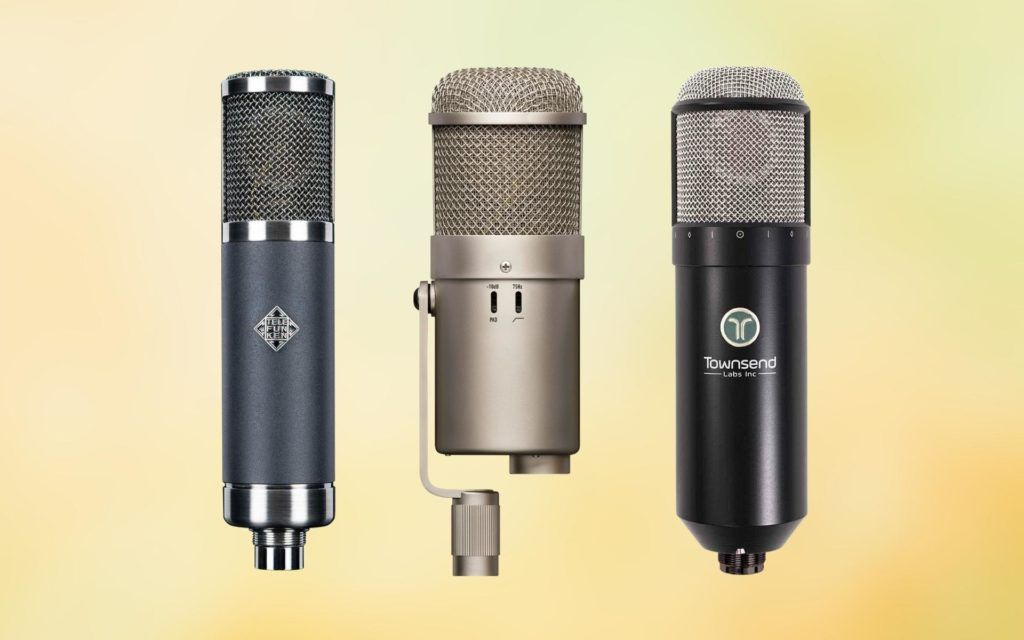 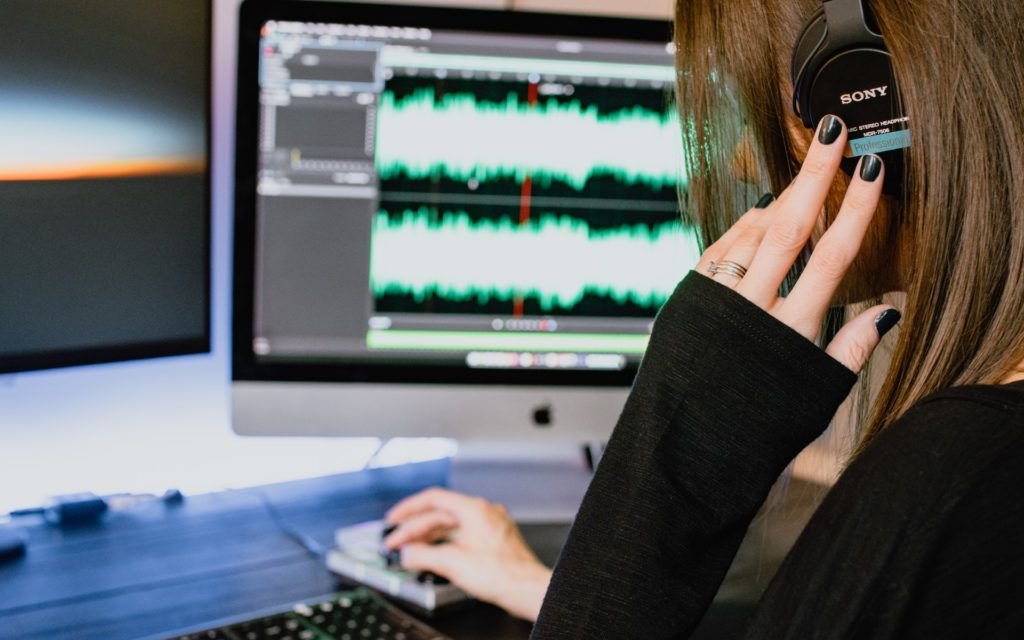 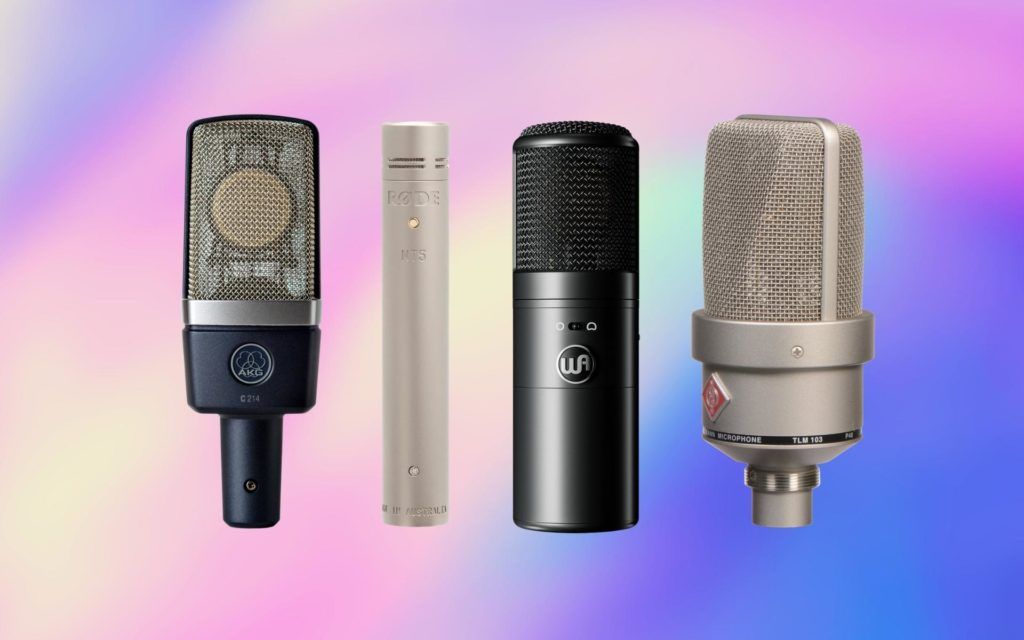