Metal is one of the best genres for musicians who want to stretch out their musical abilities. Progressive rhythms, unique techniques, and alternate tunings are commonplace in this exciting style of rock. If you’re looking for a list of bands that love to use one popular kind of alternate tuning to their advantage, look no further.

Eight metal bands that play in drop C tuning include System of a Down, Mastodon, Slipknot, Bullet for My Valentine, The Black Dahlia Murder, Converge, Metallica, and August Burns Red. The alternate tuning setup gives the heavy sound that metal fans crave and opens up the guitar’s lower register.

Drop C is a bit more complicated to set up than some alternate tunings, but once you get the hang of it, you’ll find that it’s easy to learn. Practice any of the drop C songs from these eight great bands.

Metal and rock fans may be familiar with drop D tuning. Drop D requires only one minor adjustment: You take your bottom E string and tune it one whole step down to D. All the rest of your strings will remain the same. 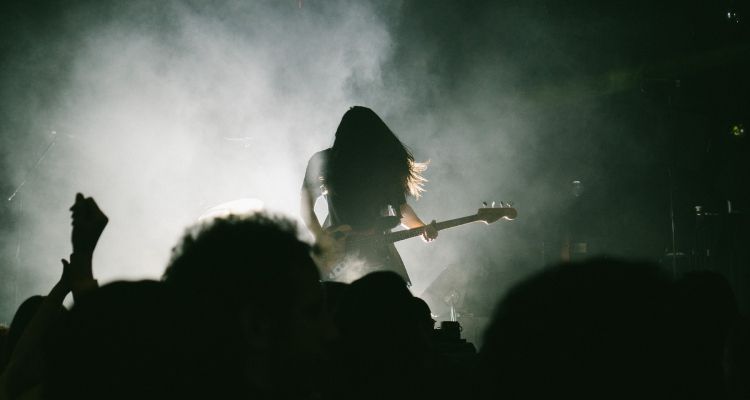 Drop C requires you to re-tune every string. However, you’re not tuning them all by the same intervals. This is where it gets a little more complex.

You’re going to take your bottom E string and tune it two whole steps down. Then take each of your other strings and tune them one whole step down.

Or think of it this way: your guitar will usually be tuned to E-A-D-G-B-E when you have it in standard tuning. In drop C, it will be tuned to C-G-C-F-A-D. Use an electronic tuner to get your strings right, rather than doing it by hand. Some tuners even come with alternate tuning settings, so you can tune with ease.

Is Drop C the Same As Open C?

Drop C is different from open C. Open tunings can be strummed without having any fingers down on the frets and ring out with a chord. Rather, drop C is simply a lower version of drop D. You will be able to make many of the same chord shapes in standard tuning, but they’ll be a step lower.

Why Use Drop C?

Metal guitarists play in drop C for the same reason they play in any alternate tunings: to get the sound they want. Playing with the tuning of your guitar can darken your tone and open up different chord shapes. It can also make certain chords easier to play.

Now that you have a better understanding of what drop C is, let’s take a closer look at some of the bands that use drop C.

System of a Down

This Armenian-American band is strongly influenced by their roots, with licks that remained cutting-edge long after their debut in 1994.

They used drop D and drop C in several of their songs before every metal band was doing it. System tackles heavy topics like drug abuse and international politics in their music, so a deeper, darker tuning suits them perfectly.

Listen to hits like “Toxicity” and “Streamline”—you’ll be able to hear how the lower notes of their guitars add something special to their music.

Mastodon is known for their ambition. They took the traditional style of playing metal and flipped it on its head while still keeping that same killer sound that metal fans love.

They’re also known for their unique tunings, making their music difficult to play, especially if you’re new to unconventional tunings.

However, they are known to play in this slightly less complicated tuning as well, so check them out if you’re looking for bands in drop C.

Ever since the release of their very first album, Mate. Feed. Kill. Repeat., Slipknot has been a champion of just what alternative tunings can do.

In fact, Slipknot takes it down a notch even further than many metal bands, taking their guitars down to drop B or even drop A.

But on their debut, also known as MFKR, drop C is the hero. This album isn’t on Spotify, so you may need to do some digging to find the right tunes.

If you’re looking to stretch your skills even further, Slipknot is a great band to get familiar with.

Bullet for My Valentine

This genre-defying group is great for guitarists and singers alike. Much of their music is compulsively singable and will be stuck in your head for days.

They may have a name that would fit an emo band, but don’t mistake them for your typical cookie-cutter metal outfit.

Even though Bullet has some naysayers who deny their metal status, they have some sophisticated guitar parts that are difficult to nail down. And yes, much of these parts are in drop C.

The Black Dahlia Murder is something of an enigma; they’re a hardcore death metal band but have somehow found their way into the heart of the mainstream.

Maybe it’s their clever name, a morbid reference to the very real murder of Elizabeth Short.

A good portion of their music is written in drop C, so you don’t have to dig through their back catalog to find great songs to practice with.

Converge is one of the first metalcore bands that fought their way to the forefront, and let’s all be grateful that they did.

They’re no strangers to drop C tuning, as well as several other tuning styles that are extremely unique, making learning how to play their songs particularly challenging.

However, since their landmark album Jane Doe was released in 2001, they’ve been playing in drop C with relative consistency.

Check out their discography from any time after this to find some drop C songs. They’re a prolific band, so you won’t be short of material!

Metallica songs are classic standards but aren’t always what you think of as “cutting edge,” and they’re not the first band that comes to mind when it comes to alternative tunings.

Yet, their long career has given them the ability to branch out and try their hand at some non-standard tunings as well.

Who said a Christian band can’t sound heavy? And with their love of drop C, August Burns Red has a sound that sounds deep and dark. They’re also boundary-pushing in surprising ways, like by using orchestral string fills.

You can pretty much take your pick from August Burns Red’s catalog, and you’ll find a song played in drop C. Some of their biggest drop C hits are listed below.

There are many more drop c bands in metal music. The ones listed here are just a small sample that have used it significantly in their career.

It’s so tempting to adjust a guitar tab written in drop C to fit a standard tuning, especially for beginners who can get confused when tuning and re-tuning their guitar.

But you’ll find that so many metal bands take advantage of drop C that it’s better to get used to it. You’ll love the way drop C sounds and what it does to your music.