One handed instruments are accessible to musicians who perhaps have a physical condition that prevents them from using two hands. They also allow some musicians to multi-task by freeing up one of their hands while playing.

Some of the instruments you can play with one hand are fairly easy to learn, while others may require you to develop unorthodox techniques. In this guide, you can find all of the one hand musical instruments in existence.

Let’s take a look at some one-hand instrument names and descriptions. 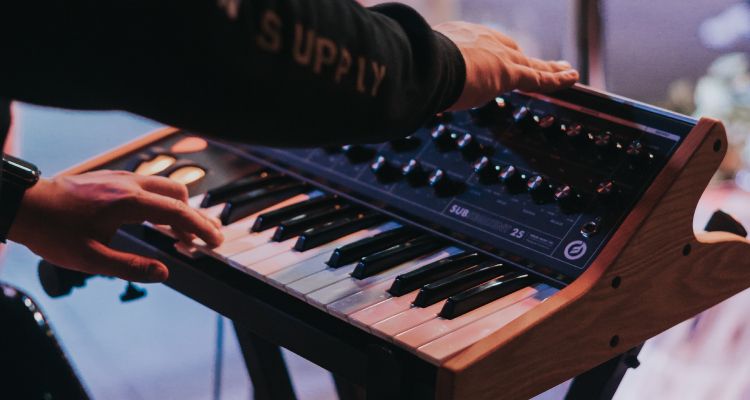 Synthesizers and keyboards are essentially digital pianos. They often include a wide range of presets, allowing the musician to access a variety of sounds inspired by other acoustic and electronic instruments.

The great thing about synths and keyboards is that they are very easy to play with one hand. A high-end synthesizer allows you to customize aspects of the sound in real-time, including the rhythm, tone, and dynamics.

Musicians can also create loops and record patterns on a keyboard, which can be saved into the user preset memory to be triggered at the appropriate time.

This is ideal for playing with one hand, as it allows you to create full-bodied sounds using the array of onboard processing tools and effects.

The trombone produces an irresistibly smooth sound with a wide dynamic range. Part of the brass family, this instrument is designed to be held in place by one hand, while the other hand adjusts a slider to alter the note that is played.

However, it is possible to play the trombone with only one hand. This is achieved by placing a stand underneath the trombone which holds it firmly in place so that the other hand is free to move the slider.

The stand that is used must be strong enough to bear most of the trombone’s weight. These instruments are generally quite heavy, so it’s essential to choose a stand that won’t buckle under the weight.

Harmonica is a unique instrument. Commonly hand-held, it can be played using one, two, or no hands. If you’ve ever watched an early Bob Dylan performance before he made the switch from acoustic to electric, you’ve probably noticed his hands-free harmonica.

Dylan used a harmonica mount, which is essentially a device that is placed over the head of the musician, with the instrument held in place by a grip mechanism at the front. This causes the harmonica to sit in front of the musician’s mouth.

Acoustic guitar players can free up their hands by using one of these harmonica mounts. Alternatively, the harmonica can be played using one hand to hold it. This requires the harmonica to be moved laterally in order to produce different notes. 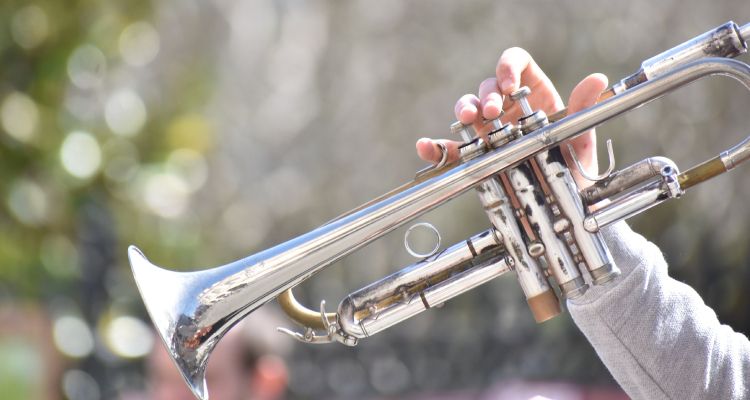 Like the trombone, the trumpet is part of the brass family, and is potentially part of the list of one handed musical instruments. Conventionally, it is held in the musician’s left hand so that the valves which produce different notes can be played with the right hand. This is often reversed for left-handed players.

Many trumpet players can play the instrument using only their strongest hand. This can be achieved by gripping the instrument with the thumb and the pinky finger, leaving the other three fingers free to play the notes.

Similar to the trombone, there are mounts and stands available for trumpet players. These can reduce the strain on the shoulder, and allow them to play the instrument one-handed.

The thumb piano, or kalimba as it is also commonly called, is a tiny instrument that is layered with different-sized pieces of metal. The metal pieces are tuned to specific notes.

It’s fairly easy to play a thumb piano with one hand, mainly because it is such a light and small instrument. The musician can use one thumb, or a combination of their thumb and fingers to pluck the metal pieces, causing notes to be played.

The kalimba is a great instrument to learn if you want to improve your ear for harmony. It is available in many different tunings and is a lot of fun to play one-handed.

Hand drums, like bongos, are easy to play. They produce different tones depending on the way that the skin is struck. Although it’s much easier to play the bongos with two hands, you can get some awesome sounds from them using only one hand.

The rhythmic side of playing bongos is quite easy to master, but the various sounds that these hand drums can make take skill and practice.

Playing bongos with one hand will limit the speed and complexity of the rhythms you can play, but you can still make solid beats using this technique.

Cajons have a long and celebrated history, but they have become considerably more popular in the western world in recent decades. A staple of live acoustic performances, they provide a diverse range of percussive sounds that resemble an acoustic drum kit.

Using two hands to play the Cajon will undoubtedly allow more freedom, but this instrument can be played effectively using only one hand.

The center of the drum makes a lower-pitched sound, which sounds like a kick drum. On the edges, you can produce a higher-pitched sound that sounds more like a snare. 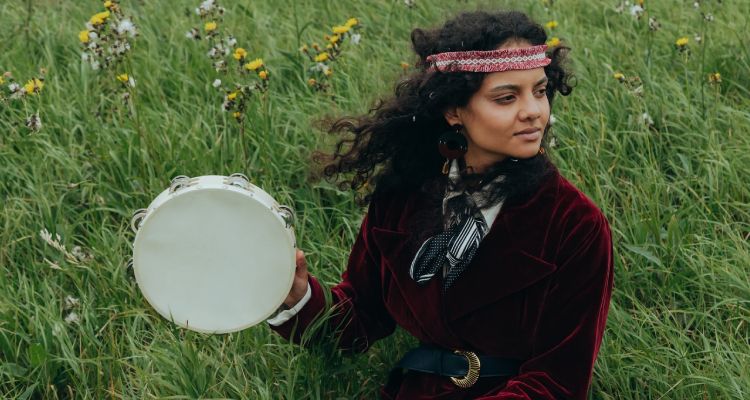 Shakers and tambourines are two percussive instruments that can be played with one hand. They’re often used by vocalists when performing live, to accent certain beats.

These instruments are amongst the easiest one-handed options out there. They require basic rhythm to play and produce consistent dynamics with little tonal or sonic variety.

Tambourines and shakers are featured in many popular recordings, across all genres. They’re often played on the beat of the snare, or in time with the hi-hat to strengthen the rhythm section of a track.

You might be a little surprised by this entry, but the electric guitar is playable with one hand.

There are two ways that this can be achieved – firstly, you can use your fretting hand to push down on the strings, or you can use open tuning and play with your strumming hand.

The first option affords you more freedom for expression in the notes that you play, as you can play any fret on the fingerboard. Ideally, you should run the electric guitar through a compressor pedal, and turn the amp up so that the notes can be heard.

If you use an alternative tuning like open E, this means that all of the open strings create an E major chord when you strum them together. It also allows you to play any open string and the note will be in the E major scale.

Playing the drums one-handed is something that most drummers try out of curiosity. Surprisingly, it is possible to create complex beats using your feet and only one hand.

By utilizing the hi-hat pedal, you can play a steady rhythm with your foot, then add in the snare and kick drums on certain beats. And, if you practice your rudiments, you can also learn to perform advanced techniques like snare rolls using only one hand.

The pan flute is a handheld instrument that is played by blowing air into the various holes of the pipes. The instrument is very small and lightweight, so playing it one-handed shouldn’t be a problem for most people.

The way that the pan flute is played resembles a concert flute. The player blows into a different pipe, which causes a different note to playing. 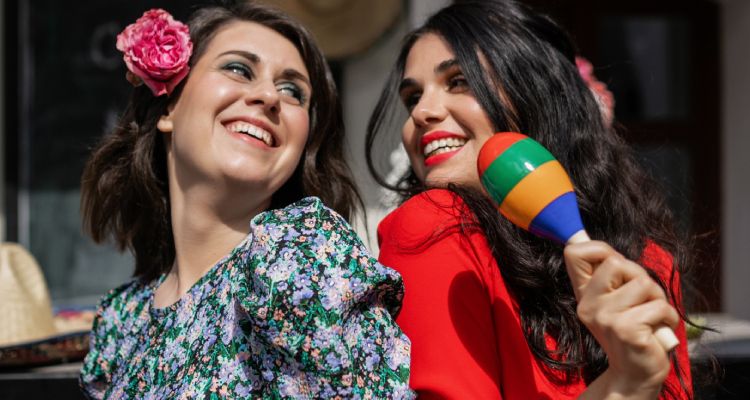 Maracas are quite similar to shakers, except they generally produce a louder sound. Commonly made from wood, they are an easy instrument to play using only one hand.

Like shakers, maracas can be used to layer a percussion track, or as a standalone form of percussion accompanying other instruments in an ensemble.

Traditional saxophones are almost impossible to play with one hand. However, in recent years, there has been a new type of sax developed especially for one-handed players.

This saxophone is played using tri-keys, which cause each key to play three notes. It means the saxophonist can hold the instrument while using their spare fingers to reach all of the notes that can be played on a conventional sax.

Most people are taught to play the piano using their left hand to play the bass notes, and their right hand to play higher in pitch. The piano is such a versatile instrument that a lot can be achieved by playing it with just one hand.

You can use one hand to play a variety of chords, including standard triads, major and minor 7th chords, and any other variation that you can think of.

Finally, drum machines and beatboxing are two potential one hand music instruments. Drum machines have pre-loaded samples, which are triggered using your finger to press a key or pad.

Beatboxing requires only your mouth, so no hands are needed! With practice, people can produce all kinds of percussive sounds using beatboxing techniques.