The song Stairway to Heaven by Led Zeppelin is one of the most iconic and recognizable rock songs of all-time.

The opening riff is also relatively easy to learn and sounds and feels great to play on a guitar. As a result, when people are experimenting with guitars or trying new models out, it is a common riff to turn to.

However, if you spend time around guitarists, or if you hang around online music communities, you are likely to encounter references to it being a “forbidden riff”.

So why can’t you play stairway to heaven in guitar stores? How did this unwritten rule come about and what does it actually mean in reality?

Why is Stairway to Heaven the Forbidden Riff?

The idea of Stairway to heaven being a “forbidden riff” originates from the 1992 movie Wayne’s World, starring Mike Myers.

At one point in the film, Mike Myers’ character is in a guitar store and starts to play a guitar riff, only for the shop worker to cut him off and point to a sign which reads “No Stairway to Heaven”.

While it is a relatively minor joke within the film, it resonated with a lot of people working in guitar stores. After all, many of them will have had to listen to guitar players attempt to play the opening riff from Stairway to Heaven countless times a day, every single day, year after year.

Essentially, the throwaway joke in the film then led to a real-life situation, where it is now often considered a forbidden riff.

Some guitar stores even followed in the footsteps of the store in the film by putting up a sign explaining the rule, in order to discourage customers from playing it when trying out a new guitar.

To be clear, the underlying problem is not that guitar store workers dislike the song or the riff. It is simply a combination of hearing the same riff over and over again, coupled with the fact that some people in guitar stores are not going to play well, which has led to the annoyance factor creeping in over time.

As an aside, the brief riff that Mike Myers actually plays in the film bears almost no resemblance to the opening riff from Stairway to Heaven whatsoever.

While this only adds to the humor of the moment, the reason for this is reportedly because the filmmakers did not have the rights to use the song and did not wish to pay a large sum.

Will I Be Thrown Out for Playing Stairway to Heaven?

While the idea that Stairway to Heaven is a forbidden song in guitar stores has widespread acceptance, in reality this does not usually amount to an outright ban.

In most cases, if you were to play Stairway to Heaven in a guitar store, you would likely be left alone or you might simply attract a few comments from those working at the store.

In a small number of cases, the ban might be enforced more strictly and if you go into stores playing Stairway to Heaven to intentionally annoy staff, it is likely you will be asked to leave. However, for the most part, you should think of it more as good etiquette. Most guitar stores hear it a lot and would rather you played something else.

If you have previously played the opening riff from Stairway to Heaven in a guitar store without knowing about this rule, do not panic. You are not alone and plenty of other people will have made the same mistake. Just try to remember for any future visits that almost any other riff would be preferable to Stairway to Heaven.

Are There Any Other Forbidden Riffs in Guitar Stores? 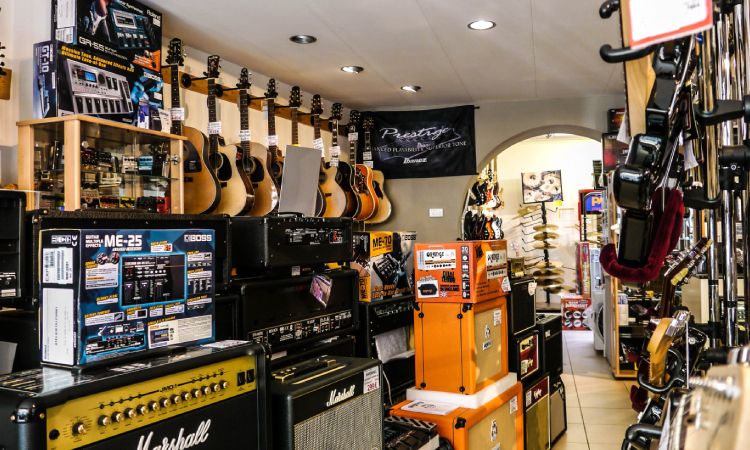 Although Stairway to Heaven is the most famous “forbidden riff” within guitar stores and the one referenced in Wayne’s World, there are a few other notable examples too. Perhaps the most famous of these is Smoke on the Water by Deep Purple, which is popular among novice guitarists because it is easy to play.

The Guns N’ Roses song Sweet Child O’ Mine is another good example, because it has one of the most famous guitar intros of all-time. This is perhaps less likely to attract comments than Stairway to Heaven or Smoke on the Water, but it is still played frequently and is best avoided if you want to spare staff any feelings of frustration.

Some guitar stores have similar feelings about Smells Like Teen Spirit by Nirvana, which was played frequently in the 1990s. The song has remained popular since and the opening riff is still often heard in guitar stores. It is unlikely to get you thrown out of a store, but just be aware that you likely won’t be the first person to play it that day.

One of the more recent additions to the forbidden riffs list is Seven Nation Army by The White Stripes. Again, this is a very distinctive riff, which is relatively easy to learn and so guitar store workers hear it all the time.

Generally speaking, if you can think of a guitar riff that is immediately recognizable and relatively simple to play, guitar store workers will have heard time and time again.

The more obscure you go with your riffs in a guitar store, the better. With that being said, you should not worry too much – just try to consider what riffs they may hear over and over again and avoid them if you possibly can. You could always ask a member of staff if you are unsure.

What Other Guitar Store Etiquette Should I Learn?

On the subject of good etiquette, when browsing a guitar store, you should always ask before picking up and playing any of the instruments that are on display.

Most often, the employees will be perfectly happy to let you play a guitar or test out an amplifier, but it is always better to be safe than sorry.

Once you have permission, you should avoid playing the instrument too loudly. Remember, the guitar store employees have to deal with customers playing on those instruments all day and they would much rather it was at an acceptable volume. This also demonstrates respect for other customers too, some of whom may be testing out other instruments.

Be extra careful when handling the instruments and remember that until you buy a guitar, it belongs to someone else. When you are done, make sure you place the guitar carefully back on its stand and avoid leaving it balanced precariously somewhere where it may get scratched or fall over.

If the guitar you want to play is difficult to reach, or requires you to climb a ladder to retrieve it, it is best to ask a member of staff for assistance. Most staff are friendly, enthusiastic about helping and would much rather take a few seconds out of their day to assist you than have to deal with a guitar that has been dropped.

Finally, be respectful of employees’ time. If you are not intending to spend any money, it is a bit unfair to expect a lot of attention from employees when they could be helping those who do have money to spend.

The idea of Stairway to Heaven being a forbidden song within guitar stores started as a joke and remains fairly tongue-in-cheek, although some shops will enforce this rule to some extent.

Generally speaking, however, if you are being respectful and are not intending to annoy anyone, you should not worry too much about what you play.