It’s common knowledge that tonewoods such as mahogany, alder, or maple are regarded as the best sounding materials for guitar bodies, but there are other options available.

Acrylic electric guitars were rarely seen or heard before the internet age, but interest in these clear-bodied instruments has increased significantly in recent years. Perhaps this is purely down to curiosity, or are there any other benefits to this type of guitar?

In this guide, we’ll provide you with a detailed breakdown of acrylic electric guitars and determine whether they’re worth investing in, or whether they’re simply a gimmick.

Acrylic guitars are very heavy, and the additional weight of these instruments, combined with their thinner tone and lack of note separation means that they are not worth buying for certain guitarists. However, others may enjoy their unusual sound and feel.

Everything You Need To Know About Acrylic Guitars

If you asked most guitarists whether they’d heard of acrylic-bodied guitars, you’d probably receive a look of confusion. These instruments have somewhat of an underground following amongst musicians.

To decide whether an acrylic guitar is worth investing in for you, we first need to take a look at the key features and aspects of these unusual instruments.

What Is a Clear Guitar?

Acrylic guitars have several names that they are also often called, including “clear guitars”, “lucite guitars”, or “plexiglass guitars”. Whichever name you choose to use, the key thing to know is that these instruments use plastic for the bodies rather than wood.

Visually, these guitars have a see-through body that reflects light strangely and interestingly. The inner electrical components of the guitar are visible through the body, which is certainly not the case when the wood is used.

This is one of the strongest arguments for acrylic guitars – they look undeniably cool. The way that their appearance changes depending on how close you are to the body, and how much light is reflecting off the surface is unique, to say the least.

Despite some guitarists dismissing the acrylic guitar as being a gimmick or a fad, their history dates back to the 1960s. The fact that they’re still around today shows that there is still a demand for these instruments.

Rolling Stones guitarist Keith Richards is known to have experimented with a clear, acrylic-bodied guitar many decades ago, but there aren’t many examples of other notable musicians choosing them over wooden-bodied axes.

High-end acrylic guitars have been made by Ampeg, under the Dan Armstrong signature range. These guitars were more expensive than many tonewood-based guitars but weren’t particularly successful in terms of sales.

The resonance of acrylic guitars is unique, and each note vibrates for a relatively long time before decaying completely.

Due to the hardness of the plastic body material, it can produce a sound that is quite thin and “tinny”, which is especially noticeable in the upper midrange and treble frequencies. This sound can become overly bright in some cases.

The sound that is produced by a clear electric guitar is also largely dependent on the other components that are installed. If the guitar has high-output pickups, it is more likely to sound harsh in the higher frequencies.

Acrylic guitars often sound best when they’re used with a small amount of gain so that the thin clean tone is given a boost in power.

If you use distortion or overdrive pedals with these guitars there’s a risk that this may result in an undesirable tone that doesn’t blend well with other instruments.

Why You Should Avoid See Through Guitars

Some would argue that see-through guitars are not worth buying. Ultimately, whether or not you agree will depend on your preferences and experiences playing these custom-designed instruments.

However, despite this being a subjective topic, there are some undeniable flaws to acrylic guitars that may deter you from wanting to use them.

One of the main reasons that many guitarists avoid see-through guitars is due to their considerable weight. These guitars are pretty heavy compared to wooden-bodied models, and this could cause problems when using them.

As guitarists, it’s important that we feel comfortable enough when wearing our instruments. We may need to play for long sessions which could last for hours when performing live.

Alternatively, we could be recording a guitar part that takes longer than expected to nail down, or we may simply feel the need to increase our practice routine to several hours a day to improve our skills.

All of these activities require us to be comfortable when playing our guitar. If we’re not, then this may lead to pain, discomfort, or even injury, which in turn could hinder our progression in the long term.

Acrylic guitars are very heavy, so wearing them for a long time will put a strain on your shoulder, neck, and back muscles, regardless of how comfortable your guitar strap is. This is not ideal, especially if you’re not used to carrying heavy weights with these parts of your body.

Therefore, anyone who isn’t confident that they can handle a heavier guitar dangling over their shoulder should avoid using an acrylic-bodied model.

Some acrylic electric guitars increase the sustain of the notes played, but the majority of cheap models out there don’t make a noticeable difference in this aspect.

The high-end Ampeg models that were first manufactured decades ago may have offered some tonal qualities that wood-bodied guitars lacked, but these days it’s difficult to find any sonic benefits to using these clear guitars.

In reality, there are minimal positive impacts on tone, dynamics, or any other aspect of the electric guitar that is achieved by having a plastic body rather than a wood one – other than perhaps producing niche, experimental tones.

Playing comfort is another aspect of the electric guitar that one could argue is subjective. However, it is undeniable that acrylic body guitars are very hard and can dig into your body when playing them.

Indeed, wood is also a very hard material, but it is often finished in a way that smoothens it and makes it feel more forgiven when it is used for the body of an electric guitar.

Plastics, like acrylic and lucite, aren’t particularly nice to touch. They feel less natural than wood, and this can be offputting when playing the guitar.

Since electric guitars were first created many decades ago, manufacturers have stuck with a specific selection of tonewoods when constructing the instrument’s body. The most popular options include alder, basswood, mahogany, and maple.

If you’re used to playing guitars with wooden bodies and you decide to suddenly switch to an acrylic-bodied electric guitar, you might be in for a few surprises. Here are some things to consider when choosing between wood vs. plastic materials for electric guitar bodies.

Why Tonewoods Are The Best Option

If tonewood-bodied electric guitars went head to head with acrylic, clear electric guitars, there’d be no contest – wood wins every time. That’s why the vast majority of guitars in production today use a type of wood for the body.

There is an argument that these see-through guitars can be a fun alternative to use from time to time, and I would agree with that. There’s no harm in experimenting with any type of instrument, as you may come up with a sound that you enjoy, and that’s always a good thing!

Nevertheless, it would be unrealistic to expect a transparent guitar to sound or feel as good as a guitar with maple, mahogany, or alder body would, These tonewoods have been used for many decades and are considered the premium choice by experienced manufacturers.

It’s also common to experience issues with tuning stability and intonation when using acrylic guitars. Granted, these issues can also occur with wood-bodied instruments, but they are significantly less likely.

If you choose to invest in a clear guitar, you may need to experiment with the string types that you use, as there is no malleability in the body so the tension is likely to increase, which could lead to strings snapping more easily.

Overall, choosing an electric guitar with a tonewood body will get you the best results in terms of playability and sound. If you want to experiment with a new style of guitar, you can have a lot of fun with an acrylic model.

Can Lucite Be Used for Guitars?

Lucite is a specific type of acrylic that has been used for clear guitar bodies in the past. It is a resin-like material that looks similar to glass in appearance and is therefore well suited to see-through guitars.

It is a common misconception that lucite and acrylic are two different materials, when in fact lucite is simply a variation of acrylic. It is renowned for its strength, stiffness, and visual clarity.

While the sonic and dynamic benefits of acrylic guitars are debatable, one thing that they do possess is an interesting aesthetical design.

Having a clear body makes these guitars look unusual and interesting, which can make you stand out when performing as part of a band or as a solo guitarist. The appearance of these instruments is certainly a major factor in their sustained popularity.

The clarity of the material allows you to see all of the inner workings of the electric guitar which are usually not visible with a wood-bodied model, and its transparency causes it to react with lights in interesting ways.

When you choose a guitar, it’s advisable to consider three key aspects – the sound it produces, the way it feels, and its physical appearance.

Acrylic guitars arguably fall short of the standard set by wood-bodied electric guitars in these first two categories, but their unique aesthetical design may be appealing to guitarists who like to be noticed.

Acrylic electric guitars, or clear guitars as they are commonly also called, are intriguing instruments that have an undeniably unique appearance. Beyond that, most guitarists agree that there aren’t many benefits to choosing this type of guitar over a conventional, tonewood-bodied instrument. 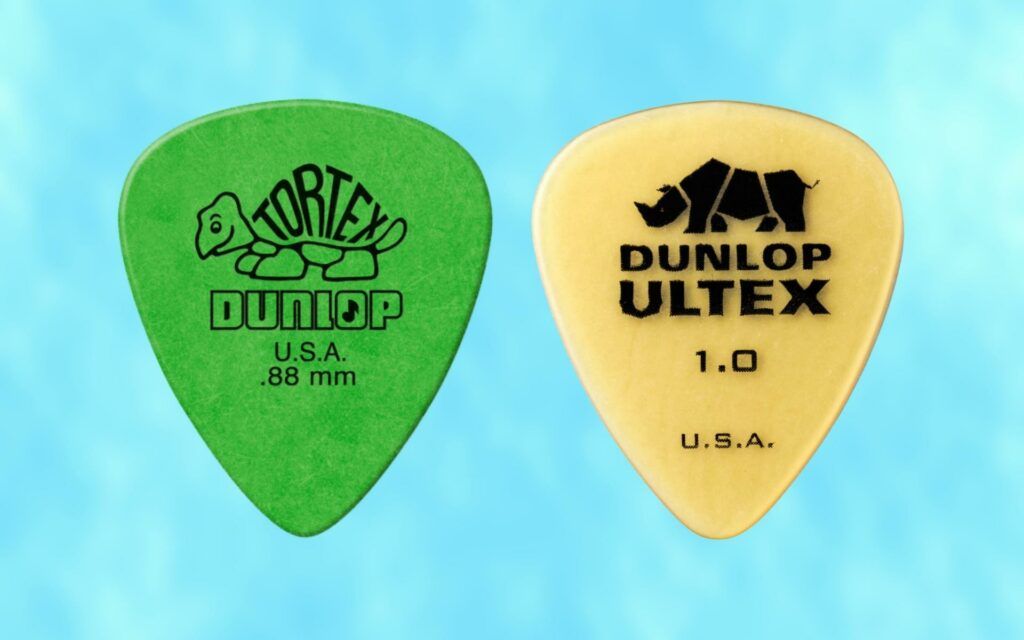 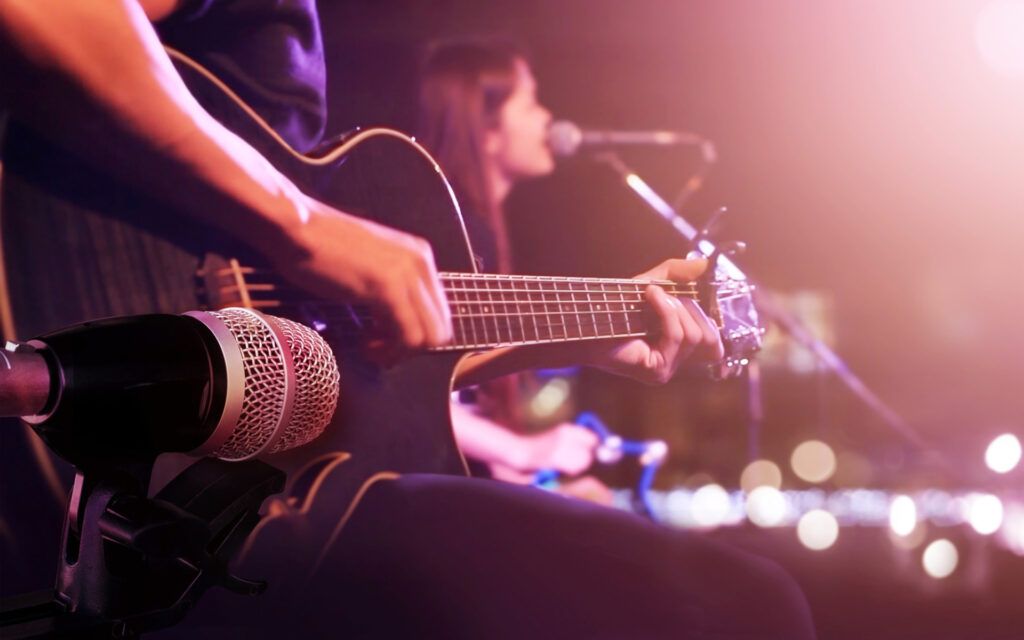